Happy Sunday, everybody! Hope you've had a wonderful weekend!

This past Friday, my family and I drove down to Vancouver, WA to spend the day with my brother, who turned 26. 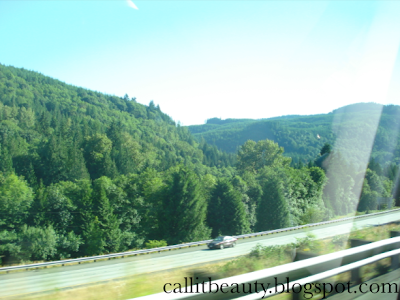 This is my favourite stretch on I5. The Pacific Northwest is truly beautiful.
Anyway, we were only there for a day but it was a lot of fun, especially because my brother and I are close. He's the one who's really pushed me as a performer and he can make me laugh like no other person can.
We ate at a Japanese restaurant in a place called Bridgeport Village in Portland. It's a really cute outdoor shopping centre. Sinju (the restaurant) had a great atmosphere and the design was beautiful. I think I may have said, "I like that!" about 10 times during dinner because it was decorated so wonderfully. The food, however, was another story as it left me and my parents underwhelmed. 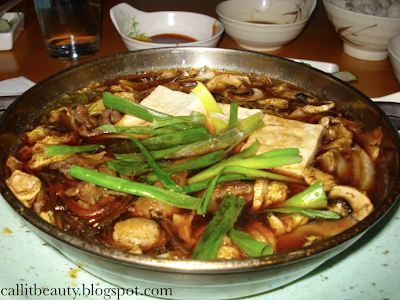 I had their sukiyaki. Now, I love sukiyaki but this was just meh. The soup was too salty and the meat was too tough. Even their creme brulee was nothing to be excited about. Then again, it IS creme brulee in a Japanese restaurant. Maybe I shouldn't have had any expectations. 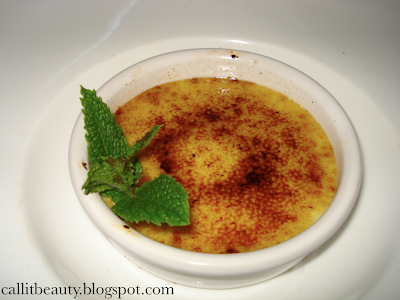 The creme brulee wasn't, in my brother's words, "brulee'd enough." It wasn't bad... It just wasn't good. My brother had monchi and I should've ordered that instead. 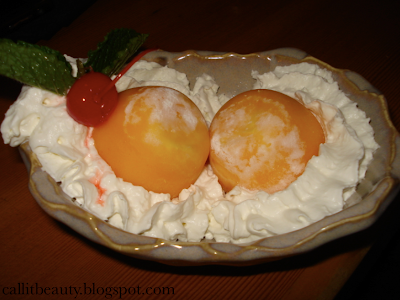 Now I want some. He also had this thing called crunchy roll or something and it was SO yummy! If we ever go back to Sinju, I'll definitely be having what he had. Or maybe I'll have this:

Sound good? No? Yeah...
I also wheedled my dad to take me to Target so I can check out some products by Pixi, JK by Jemma Kidd, and Sonia Kashuk. Plus I wanted to stock up on some Boots Cleansing Milk. Following on the theme of being underwhelmed, I have to say I was overwhelmed by the Jemma Kidd and Pixi products. Although I wanted the Sonia Kashuk flat blusher brush and the Pixi illuminating tint & conceal but I wasn't interested in getting taxed at the border, so I decided against it at the moment. 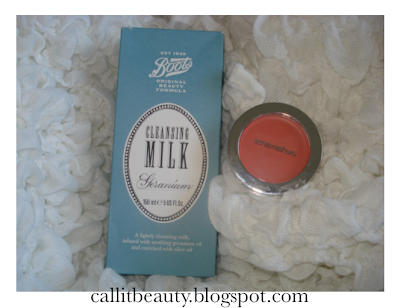 So I ended up just purchasing a backup of the Boots Cleansing Milk, which I love so much and is unfortunately unavailable in Canada, and a Sonia Kashuk cream blush (which I'll review soon).
In other random news: I changed my Twitter because my last one was hacked. All my links were coming up with a picture of a "little man" in a bikini instead of links to my blog.
I'M. SERIOUS.
Anyway, I couldn't fix it because I'm pretty technically challenged so I decided it would be easier to make a new one instead. So if you want to add me, you can "follow" me at callit_beauty.
So that was the embarrassing moment of the week. I really hope none of you saw that... Unless you're into that kind of thing, in which case, I won't judge.
Also, I encourage you to read up on the MAC/Rodarte situation. Mizzworthy and Makeup Savvy both wrote great posts about it in their blogs. There is nothing else I can add to what they have said, but I will reiterate what I posted on Makeup Savvy's blog:
I can give MAC that benefit of the doubt. But Rodarte did enough research for this line and they don't get to use ignorance as an excuse. Now, the damage has already been done. But I believe MAC can salvage the situation but they need to do a lot, and it all boils down to whether or not they believe it's worth it (and I sincerely hope they do).
So MAC says they will donate proceeds to help the situation in Juarez. That's commendable, really it is. But they need to be accountable to us, the consumer, and to the women of Juarez whose realities are being exploited for the monetary gain of two very well known companies.
Step up, MAC. Show us that you care enough for these women.
So what are your thoughts on the MAC/Rodarte controversy?
Posted by dani@callitbeauty at 3:29 PM