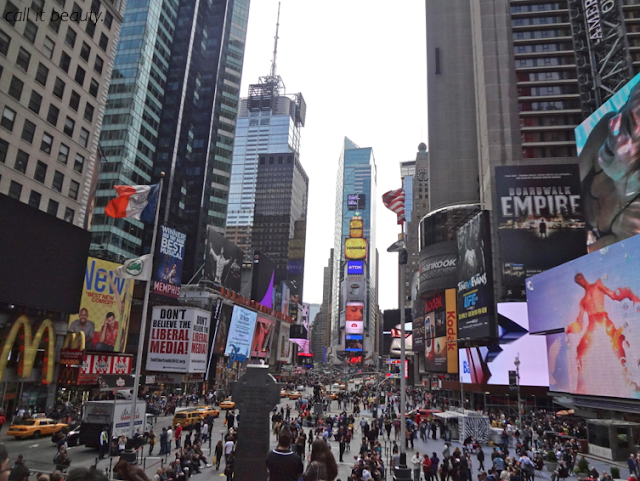 Well look who's finally back with a blog post!

Firstly, I must really apologize for my absence these last few weeks. Life was kicking my butt prior to leaving for NYC, so I decided to take a bit of a break to just focus on what needed to get done. Unfortunately, that meant blogging needed to be put on the back burner for a little bit. But hopefully, I'll be getting back into the swing of things very soon.

In the meantime, I thought I would regale you all with some stories from my amazing trip. 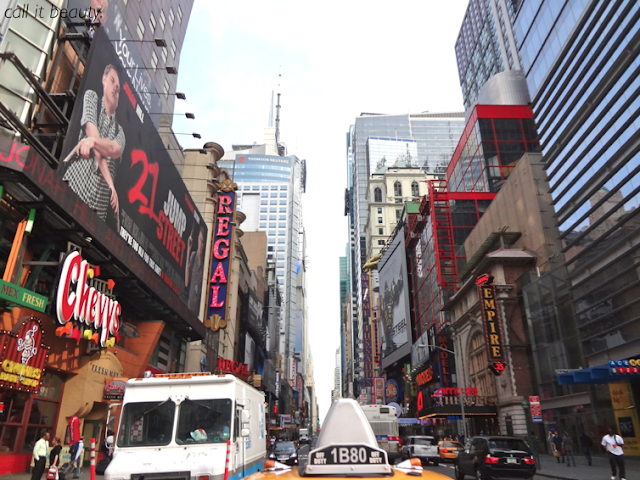 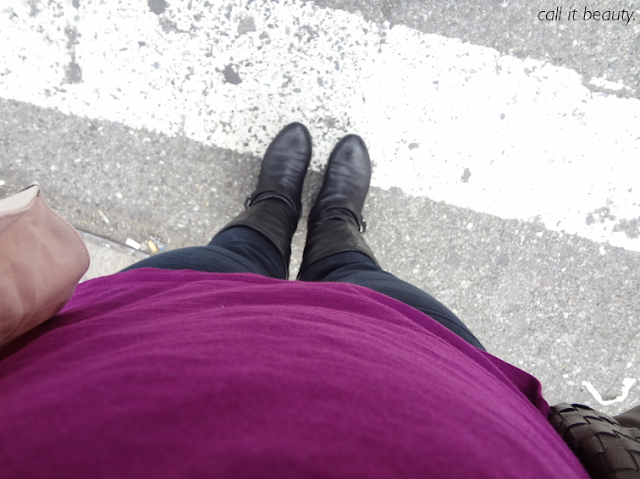 This trip was definitely very spur of the moment; my friend Kim and I literally did not book anything until the Tuesday before we left! Still, everything worked out for the best, and we were able to spend 4 glorious days in beautiful New York City.

Friday morning was spent lugging my suitcase around NYC (up and down subway stairs, too!), checking into the apartment, buying groceries, freshening up, and eating breakfast. Then we headed to TKTS to buy tickets for our first show - Seminar with Alan Rickman.

After we purchased, our tickets, we took the subway to the NYU area to meet up with none other than Xiao of Messy Wands! We ate at this amazing place called Ippudo (it's so amazing, people start lining up to eat there half an hour before they even open) where the employees like to yell... A lot... They were very enthusiastic about their yelling!

I'm so glad I was able to meet Xiao! There was a lot of laughing and fangirling involved and we had so much fun that night! 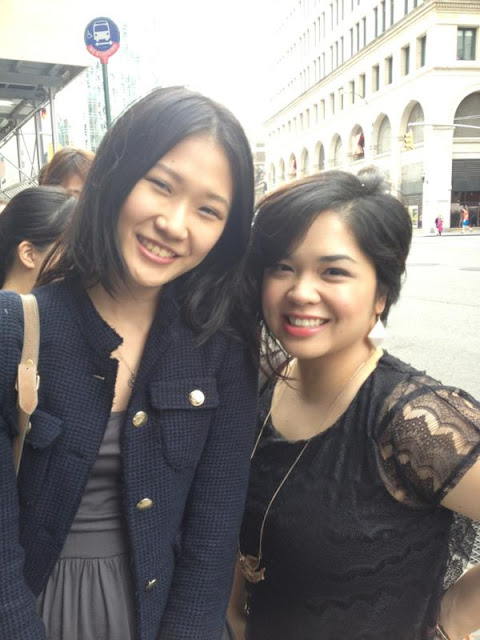 Me and the "fiancée" 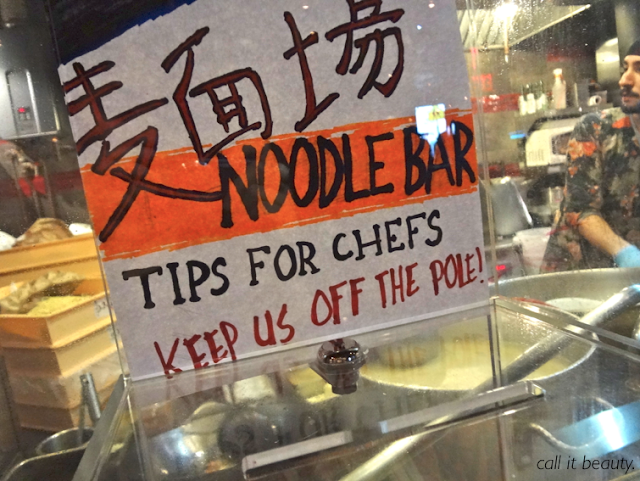 The most amusing tip box sign I've ever seen

After helping Kim's friends with Godspell lottery (more on that later), we headed to the John Golden Theatre on 45th Street for our show.

When Alan Rickman walked out onstage during the second scene, the 3 of us girls literally clutched each others hands! His stage presence is incredible and he was so intense in one scene in particular that I felt like I was holding my breath. It was so personal, I felt like I was intruding on a very private conversation and I thought that I should probably walk out to give them privacy or something :p.

The other actors (Lily Rabe, Hamish Linklater, Hetienne Park, and Jerry O'Connell) were also fabulous. I especially loved Lily and I think I have a girl crush on her now. The writing was hilarious, too! 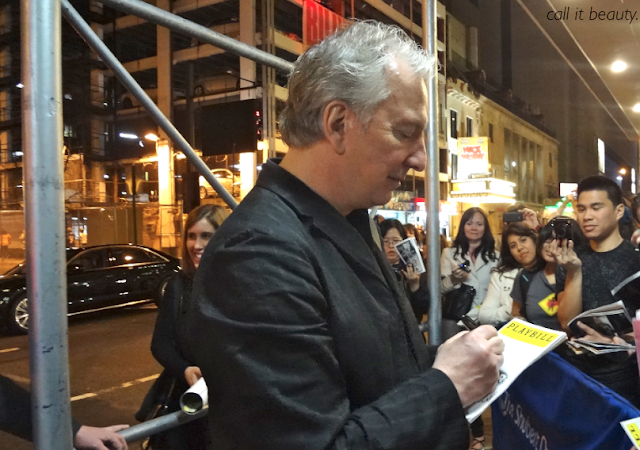 Yes, that's Alan Rickman. Yes, he stood right in front of and looked right at me. He's quiet, but very nice in person. We mentioned that we came from Canada to see him, which he was appreciative about. Then he asked us where in Canada we were from; we answered with Vancouver and he said he loved Vancouver (come to Vancouver, Alan!!!). So if you're at stage door, let the performers know you're from out of town, they will love it! 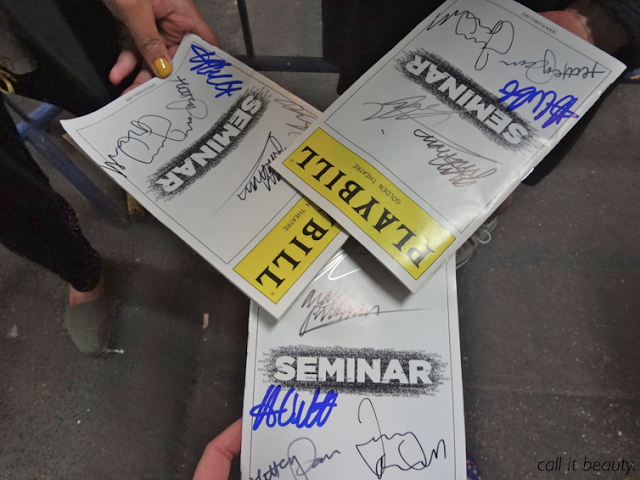 Kim went to see her family in Long Island on Saturday, so I roamed around Times Square and the Theatre District until the matinee show of Sister Act. It was during this time when I was mistaken for a New Yorker by a fellow tourist. Not only that, she also said I looked like "a young star going to work."

... She became my favourite person ever after that exchange... 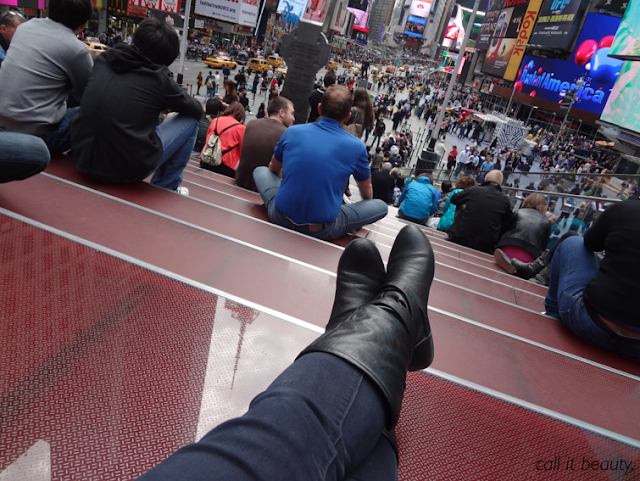 Sitting on the red steps in Times Square 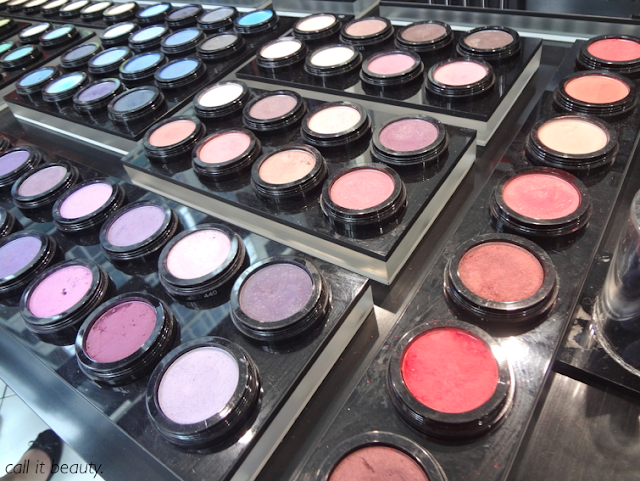 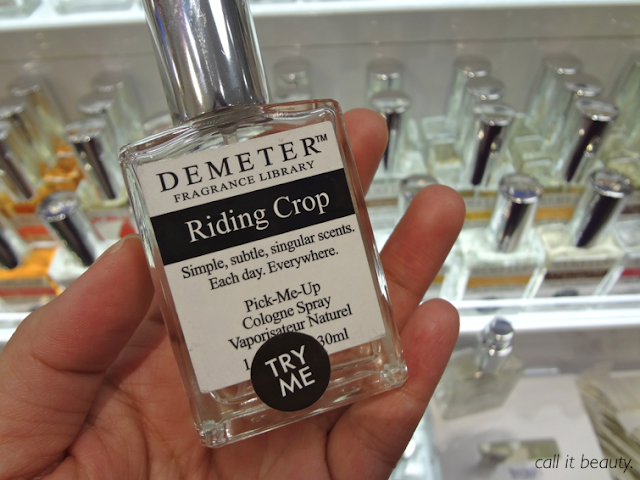 "We'll start with the riding crop..." My fellow BC/Sherlock enthusiasts will get this :) 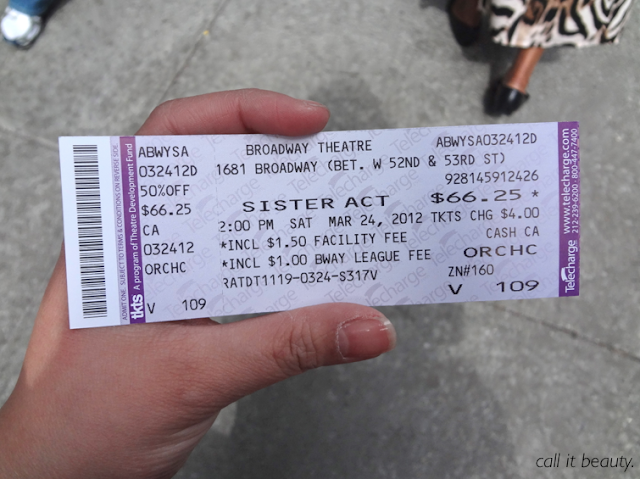 Fell in love with this show!

Sister Act was amazing! It was so funny and the songs were so fun and catchy! I think I was stupid-grinning through the whole thing. So many amazing voices on that stage, too <3.

After Sister Act, I lined up at TKTS again because Kim and I wanted to watch Seminar (again). It was here that I realized that I basically lose all eloquence when speaking with a good looking man. Must work on that ASAP. :p

Seminar the second time around was actually even better. Alan Rickman's monologue was INSANE on Saturday night! Way more intense than the previous night; in fact, he was practically growling! O.O 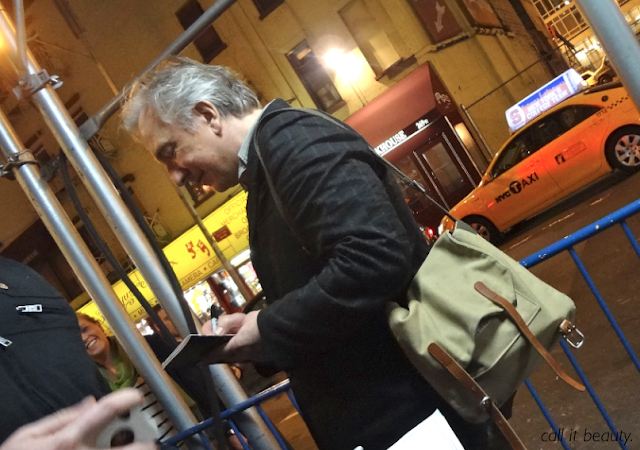 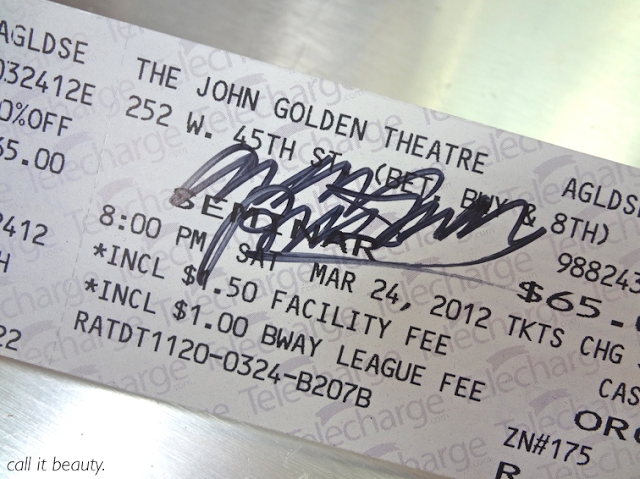 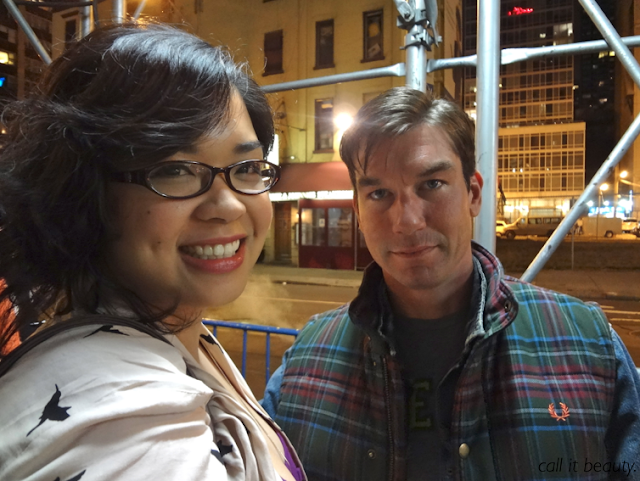 Jerry O'Connell was so lovely at stage door! He offered to take a photo with me (I feel awkward asking performers for photos, so I never do), which was so nice of him, and even crouched down while I tiptoed so we could even out our height difference! :p

I raved about Sister Act enough that Kim wanted to go see it, too. So we watched a matinee performance on Sunday and it was just as amazing as the performance on Saturday. Gosh, I love this show!

Later that night, we decided to try our hand at the Godspell lottery... For those who are unfamiliar, most (if not all) theatres will reserve the front row seats for lotto. You have to enter your name and email address and are then given a ticket stub. After all entries are received, a staff member will pull up X amount of tickets and if you "win," you get to purchase up to two tickets at a ridiculously good price. I paid around $64 for two tickets, which is less than one ticket bought at TKTS. 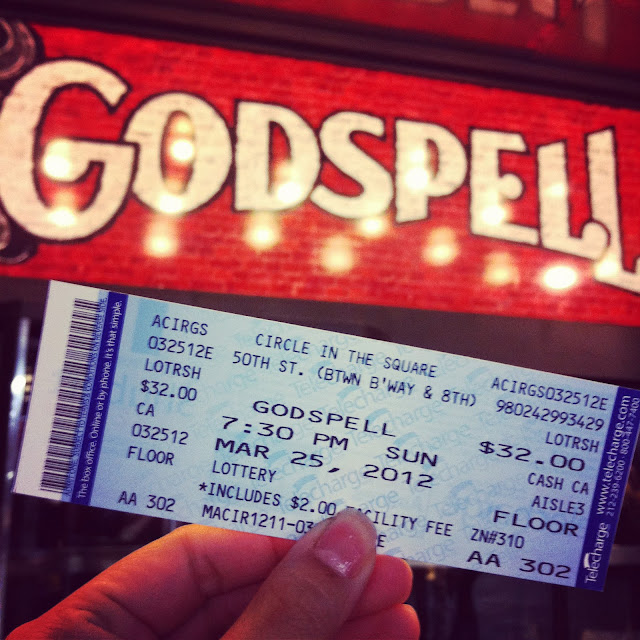 I must say, I was incredibly surprised by Godspell. I saw the first few minutes of the film and wasn't intrigued by it. But I went along because my friend wanted to ogle Hunter Parrish (who wouldn't, though?). The show was fantastic! The cast's energy was amazing, the songs were so catchy, and it was much funnier than I expected it to be. I would gladly watch it again and again, actually.

After Sunday comes Monday (after which, comes Tuesday), which meant we were leaving #SadFace. So we took the time during the morning and afternoon to just roam around the city. We walked to 60th, through Central Park, up to the Lincoln Center, and back to the apartment before heading to JFK. 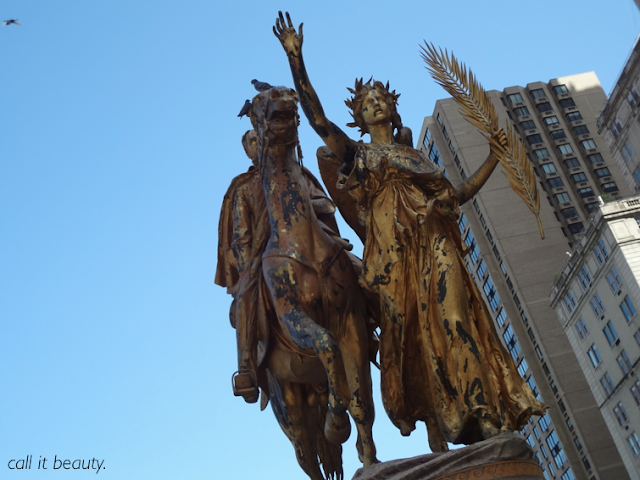 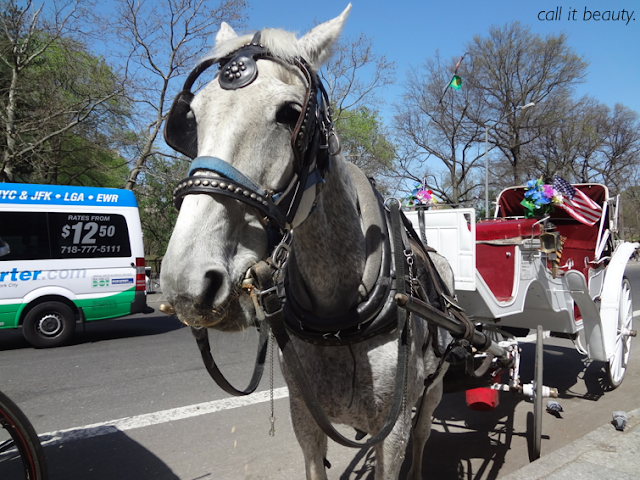 Tangent: I'm no animal rights activist, but some of these horses looked so sad and defeated,
I just wanted to free them! </3 :( 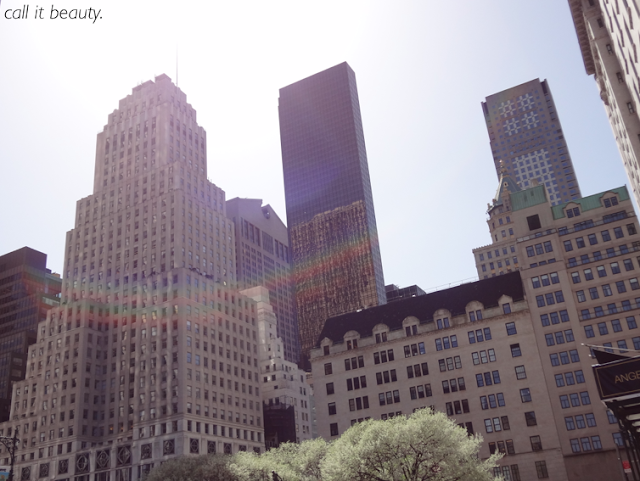 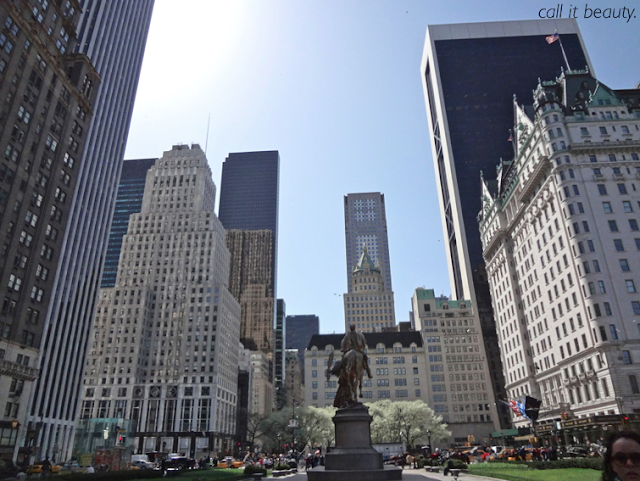 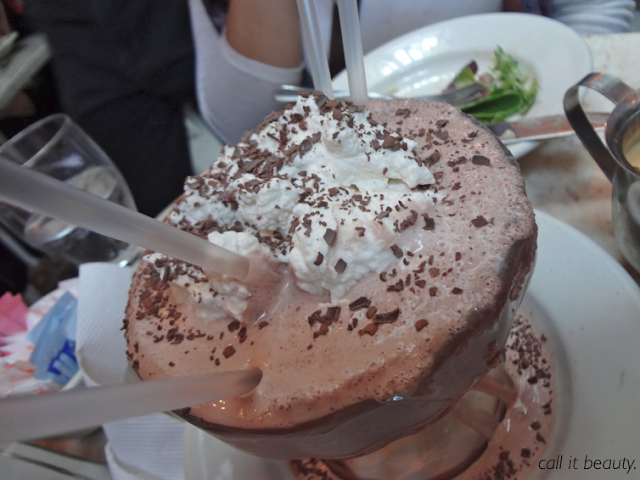 If you are ever in NYC, you *need* to go to Serendipity 3 on 60th and try their Frrrozen Hot Chocolate. It is so flipping' good! <3

Don't worry, I haven't forgotten that this is a beauty blog!

Of course, I couldn't leave New York without getting a few things... Well, technically I could, but... Ah, never mind... 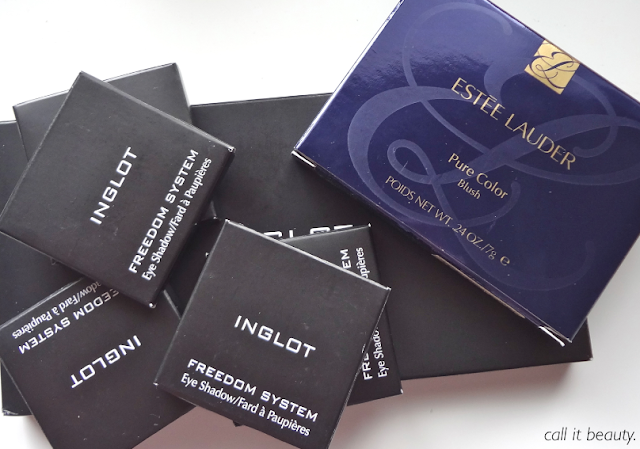 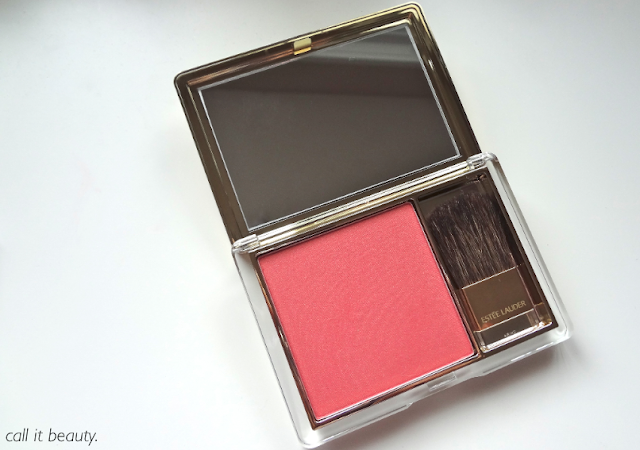 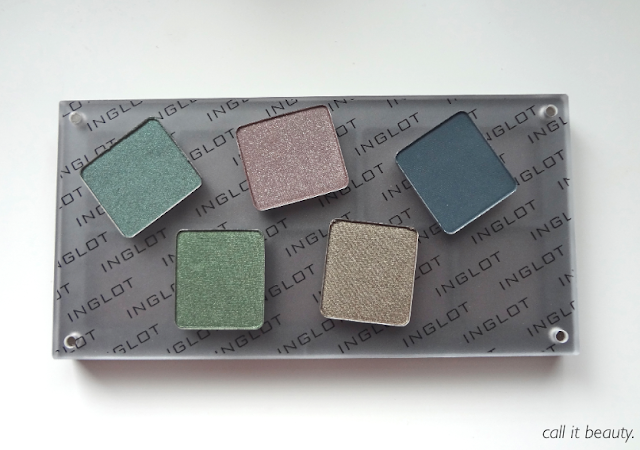 So excited about these latest purchases! I'll be testing them soon and I can't wait to share my thoughts with you guys!

Anyway, that is my ramble of a post about the city that I luuurve <3. I hope I haven't bored you all too much!

Posted by dani@callitbeauty at 8:00 AM